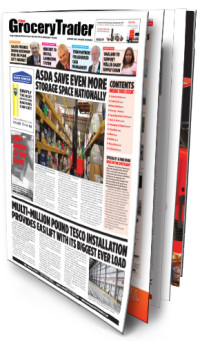 Welcome to The Grocery Trader’s August issue. As the Christmas peak looms large and back of store performance becomes even more critical, we bring you our quarterly Back of Store feature, updating you on the latest developments in warehousing and logistics products and services for the UK grocery industry.

As reported on our front page, Asda has saved on average 40% of space per store in its ‘back of house’ high bay racking areas, by reducing aisle widths to under 2 metres and operating Bendi VNA trucks, the first of which Bendi delivered to the retailer five years ago.

As these and the other stories in our Back of Store feature confirm, the leading companies in UK multiple grocery continue investing heavily in the back of store, to ensure they go on delivering maximum productivity as they compete for market share.

Also in this issue we also preview the Speciality & Fine Food Fair London 2011, opening at Olympia in a few short weeks. The Grocery Trader has been visiting the show since 2002, and it’s great to see this important part of the food calendar going from strength to strength.

The approach of autumn means the onset of the home baking season, subject of our third feature. A combination of recession and a home baking revival has helped the sector rise like a cake to an estimated £576m in 2010, with 28% of us scratch baking every week.

Just a few years ago Speciality & Fine Food Fair exhibitors polarised into those loathe to sell to the multiples – the majority – and the few who were happy to talk to them. The reality was, back then, many suppliers had been burnt by the supermarkets, and had an aversion to doing any more business with them. Now there are now large numbers of smaller producers, many run by people coming into the market after careers in large food companies, with the confidence to take on the supermarkets. At the same time the supermarkets have taken to heart the consumers’ concerns and the small suppliers’ defensiveness and publicised their involvement with these suppliers as an important part of their regional strategy. Perhaps now it’s time to re-name the Speciality & Fine Food Fair, where the emphasis is visibly on these values, “the real food fair.”